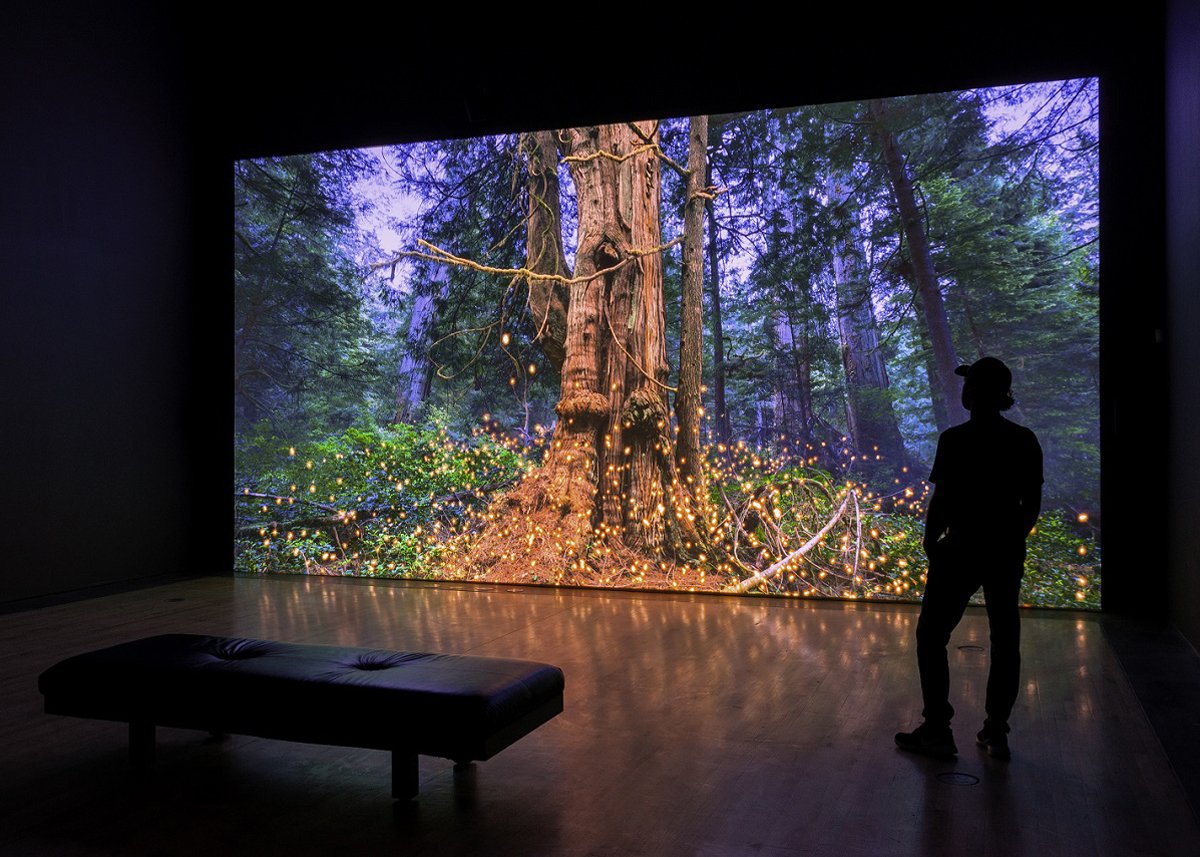 EMBERS AND THE GIANTS
George Vasey

A woman wakes up to a repetitive thudding sound. She opens her window and sees her elderly neighbour hacking down an old tree and asks: “what are you doing?” The gentlemen explains: “I’m killing the tree before I die. I’ll be damned if it outlives me.” I remember reading this brief story in Paul Auster’s True Tales of American Life, 1998, and I recount it here from memory. It resonated with me in several ways. What did the tree do to affront the neighbour? Why go to the trouble?

We can see the poor tree, cut down by an ailing man, as merely the latest victim of human hubris that views nature as a mere backdrop, to be exploited and extracted from at will. Sorry, have I gone in too hard. Are you sitting down? A recent World Wildlife Fund report states that between 1970 and 2010, the world lost 52% of its biodiversity. As income inequality increases, the alarming destruction of plant and animal life accelerates. Our economic structure is predicated on a system that serves the few by exploiting everybody and everything else. Many people believe we’re in the midst of a mass extinction and we urgently need to adjust our relationship to the nature. The pessimists among us, think it’s too late.

In A Billion Black Anthropocenes or None, 2018, Kathryn Yusoff reminds us that recorded human intervention in nature dates back to the 16th century with the colonisation of America. Europeans brought slavery and disease that killed 90% of the indigenous population, and this genocide returned the previously managed land back to its natural state. Scientists have observed a significant drop in atmospheric carbon dioxide in Antarctic ice during this period because of the sudden re-growth of trees. The violence of colonialism has marked the land and bodies in unimaginable ways; enslavement, capital, and the ecological are deeply entangled.

Environmental movements such as Extinction Rebellion have created an insurgent demand to resist ecological catastrophe and maintain a more sustainable relationship to the planet. Similarly, there has been a recent ecological turn in filmmaking, literature and contemporary art that de-centres human consciousness, foregrounding intelligent plants, fungi and animal rights. Writers such as Donna Haraway and Anna Tsing have explored inter-species kinship and promoted an equity between human and non-human life. In The Care Manifesto, 2020, The Care Collective call for a “promiscuous care” that extends empathetic bonds beyond the family and calls for a politics of interdependence that centres care between humans and the environment.

Another strand of cultural activity explores our estranged relationship to the land through a focus on haunting and eerie-ness. From the sound work of Richard Skelton to the writing of Robert Macfarlane, many of these responses are pervaded by what some have called solastagia — a kind of emotional distress for a landscape lost to the ravishes of environmental change. In recent years, the rural has become a locus for artists, writers and musicians that have infused it with occult and magical imagery. For Helen Macdonald this re-enchantment is an attempt to reclaim nature and save it from carelessness.

Kelly Richardson’s moving image work Embers and the Giants, 2019-20, belongs to this tradition of re-enchantment. It depicts an ancient and monumental tree during twilight occupying the centre of a large screen. 12 foot wide at its base, its knotty branches and scaled bark bear witness to thousands of years of lived experience. Embers emanate from the ground and erratically fly around. As they flicker on their incongruous flight, it becomes increasingly clear that they are artificial. The soundtrack is a sonic thicket that merges animal, vegetal and digital sounds. Nature and technology elide uneasily. The sound of the forest becomes an ominous hymn.

The tree is part of an endangered old-growth forest in Vancouver Island, which has specific importance to First Nations cultures in Canada. It has lost 97% of its native ecosystems because of industrial logging. The tree is a ‘veteran’ and could be up to 2,000 years old, maturing in an ecosystem rich in species which took millennia to develop. The forest’s complex biology is threatened because of short-term financial imperatives and is now close to extinction.

Filmed with two (of only seven in the world) IMAX cameras taken directly from the set of the latest Avengers movie, the scale and resolution of Embers and the Giants overwhelms. This is nature as blockbuster, a guided tour of the forest accompanied by super-size Pepsi and over-priced popcorn. Richardson understands that most people’s relationship to nature is mediated via glossy David Attenborough BBC documentaries. Attention is a competitive business, and artists must duel with these visual regimes.

Richardson’s work has often presented us with fantastic vistas inhabited by dystopian imagery. Mariner 9, 2012, is set in the distant future on a martian landscape littered with broken and barely functioning space junk. Societies record their achievements in marble and bronze, but perhaps it’s the rubbish that will memorialise our legacies. The Erudition, 2010, presents us with holographic trees gently swaying on a lunar-esque landscape. Are the trees from a futuristic theme park rendered to appease future humans suffering from solastalgia? Like many of the artist’s films, these ambient works hold us in a purgatorial space, leaving us with more questions than answers.

Climate change is a form of slow violence, enacted over many generations. While it is often difficult to grasp, its scars run deep. The urgency for artists is to make the abstract, concrete and paint a vivid picture in people’s minds. Richardson re-makes the sublime for the 21st century, presenting us with landscapes that merge the spectral and the spectacular. In doing so, she creates a kind of third space where technology and nature meet; where memory and visions of the future collide.

To paraphrase Audio Lorde, poetry turns language into ideas into tangible action. Likewise, Embers and the Giants’ emotional overtures is a call to action. Richardson turns looking into recognition into responsibility for the 48% of remaining biodiversity. She fixes our gaze so we can’t avert it any longer.