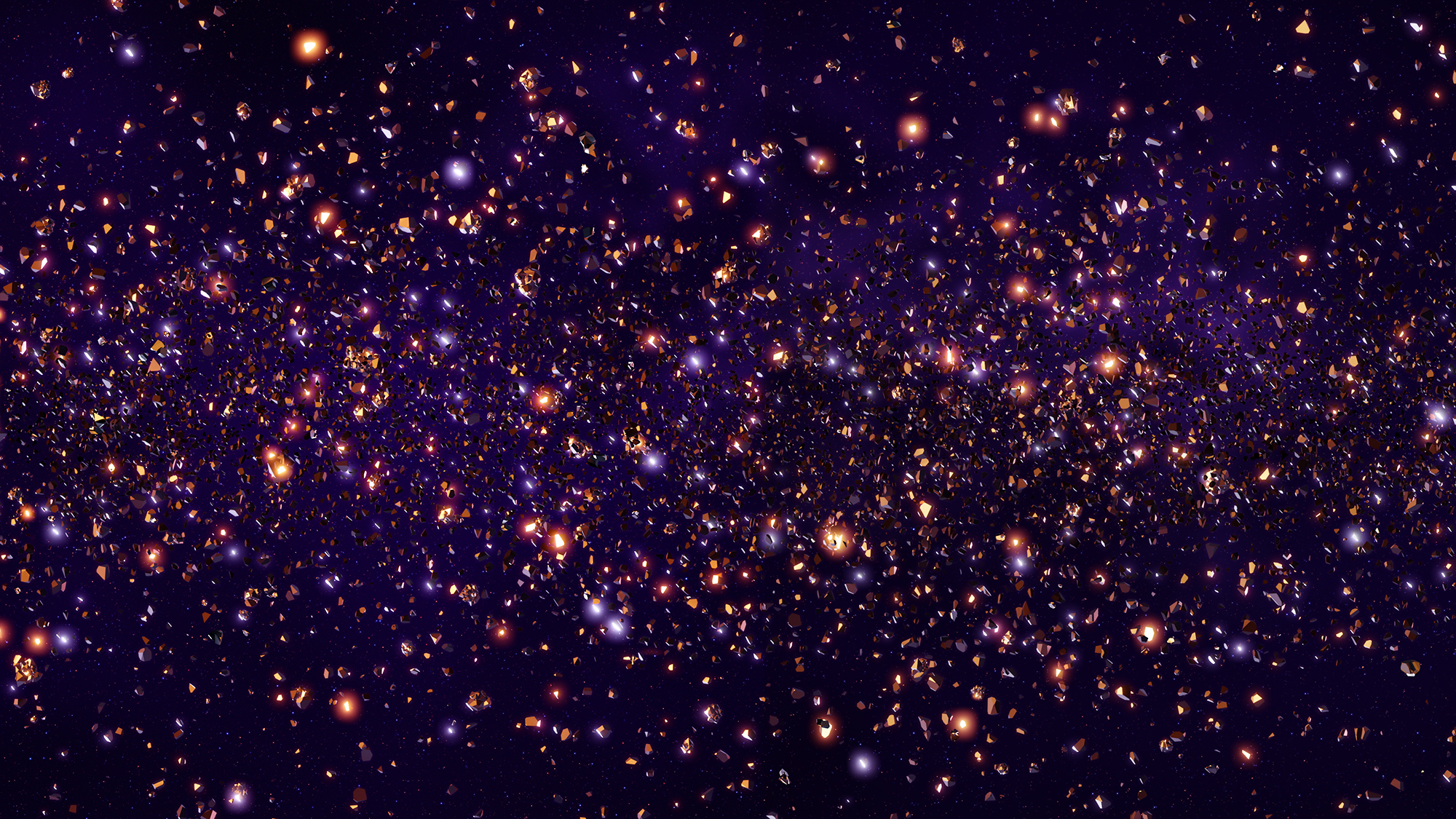 Origin Stories carries on ideas explored in previous works by Richardson where extinct species have taken the form of crystals. It is as though complex life has been transformed into pure carbon – that is, into the most concentrated forms of pure carbon in the natural world – diamonds. Set adrift amongst the stars, the crystalline debris field reveals the majesty and infinite wealth of our home within context of the known universe – where as far as humanity has confirmed, Earth is the only known planet to foster life. With monumental efforts to discover life elsewhere, how differently would we value any of the species which we allowed to go extinct today, if they were discovered on another planet? Ultimately, the work asks us to consider what it is that we truly value.

Origin Stories was inspired by Richardson’s involvement in the Awi’nakola Foundation, a collective working towards primary, old-growth forest preservation and restoration in BC. The idea for the work builds on the many conversations with members – including world renowned forest ecologyst Dr. Suzanne Simard – about complex life forms which took 4 billion years to evolve and which we are losing at a terrifying rate within the current extinction crisis, fuelled by the continual logging of some of the last primary forests on the planet in BC. Kwakwaka’wakw origin stories generously shared by Ma’amtagila Hereditary Chief Makwala – Rande Cook provided an unexpected lens to this work and while these remain sacred, the title is a direct nod to this, along with the many theories, stories and ways of knowing how complex life evolved and by extension, how incredibly fortunate we were to be a part of it. 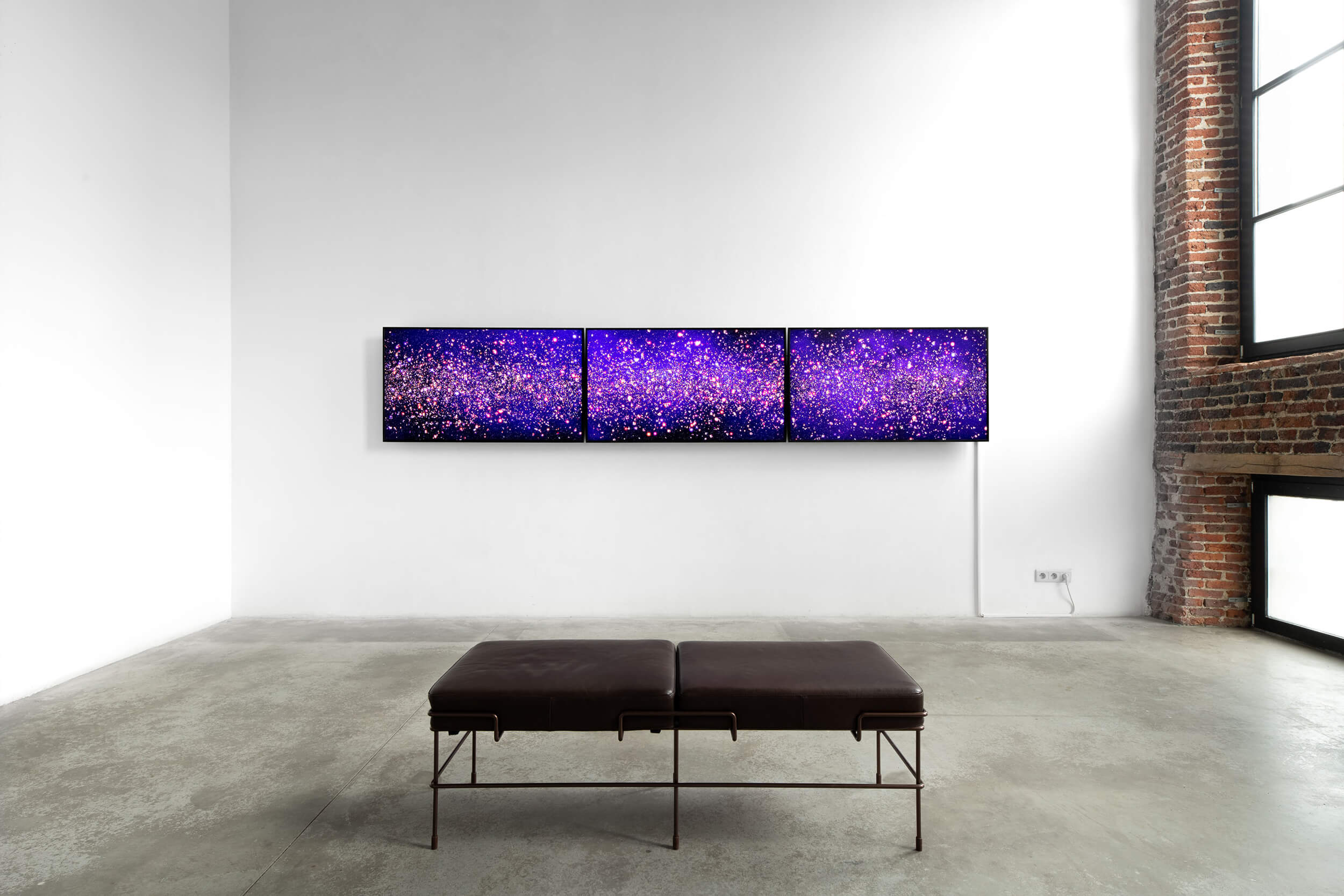 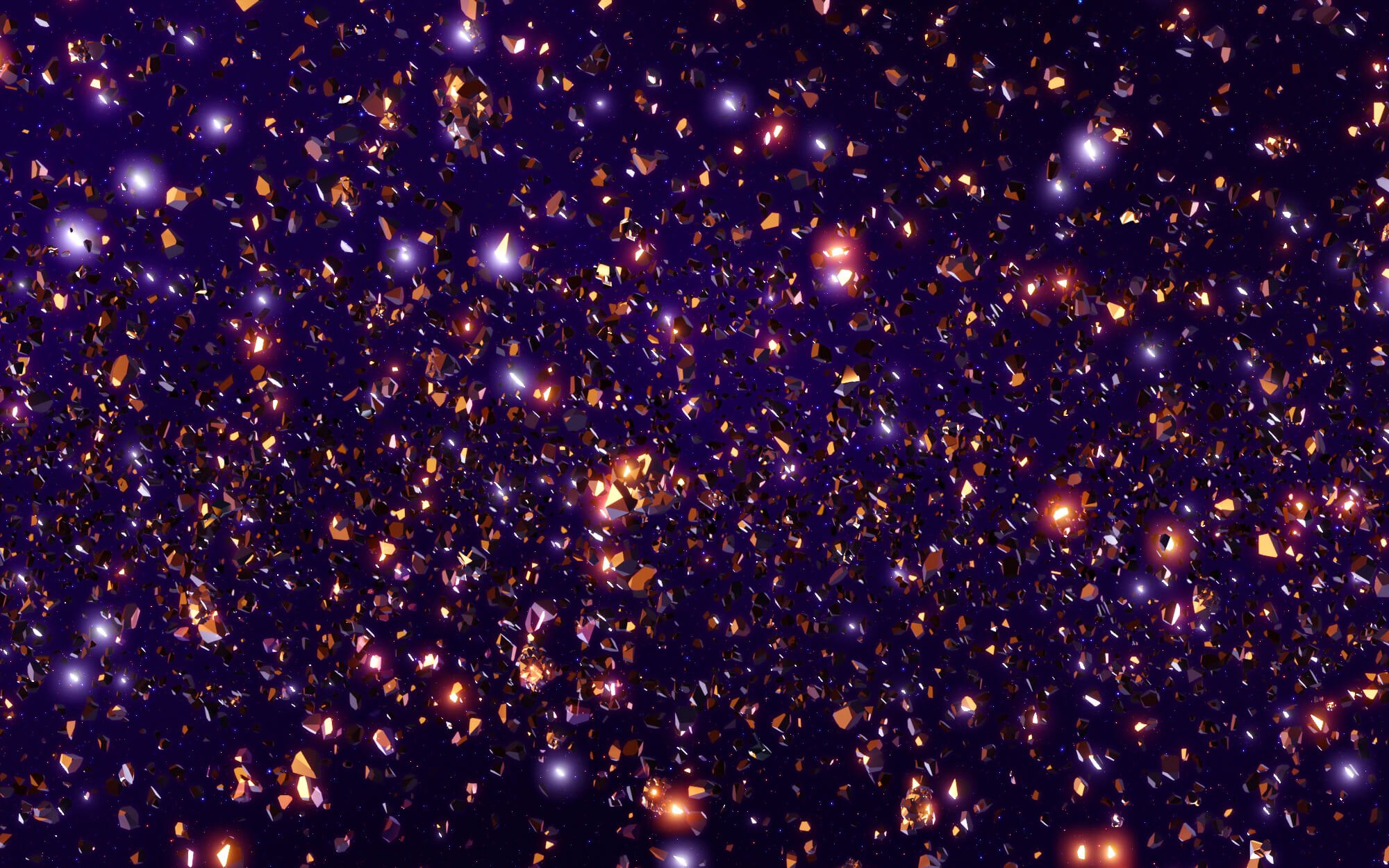 This Emptiness is Normal

Text by Alexandra Crouwers for the premiere of Origin Stories in the exhibition REVENANTS with Nicolas Sassoon and Rick Silva (Waldburger Wouters Gallery, curated by Rectangle).

Scale is everything. What may look like a solid upon closer inspection turns out to be a void. Lights in the night sky that to us appear as stars may instead be expansive galactic clouds housing multiple galaxies.

Charles and Ray Eames’ iconic production ‘The Powers of Ten’ (1977) takes us from our tangible human scale – a lazy Sunday picnic scene in a park – to the incomprehensible vastness of space and beyond back, all the way to the sub-atomic realm. At the 24th power of ten, after flying past galaxy clusters, we reach the limit of the known universe in 1977 – 100 million light years away. We’re left with a black screen, and the voice-over cheerfully announces: “This emptiness is normal”.

This is by no means a hollow statement, because after zooming back in through all powers, and diving into our cellular structures, this emptiness is eerily reflected on the microscopic level of the 10th power of minus ten, at 0.01 angstrom.

A similar disorienting sense of relativity can be applied to time: we may notice our Earth’s crust’s movements sometimes as hiccups in the form of volcano eruptions or earth quakes. Despite their potential significant regional impact, they only suggest minor movements on a planetary scale. We tend to think of the planet as fairly stable grounds, but experienced in deep time, Earth behaves more like a boiling, chunky stew. Glaciers flow like syrup, islands pop up and vanish, coastlines fold out of sight, mountain ranges rise sharply and erode into friendly hills, and whole seas evaporate while other basins are being filled. It’s all very exhilarating.

Our current, surprisingly cuddly, upper layer of life wouldn’t have been possible if not for the violent bombardments of meteors our younger planet had to endure. From destruction, an incredibly complicated and elegant biosphere emerged. It’s the conundrum at the roots of myths and at the hearts of circular belief systems.

We’re usually only reminded of our planet’s inner workings when disruptive pyroclastic clouds cancel our flights. Nicolas Sassoon’s ‘Prophets’, sculptures series is literally based on lava rocks, and offers us a view on their own origins. It’s as if these antenna’ed creatures are here, in possibly the least geological space in existence – a contemporary art gallery – to gently remind us of the unimaginable turmoil that is in a constant grind beneath our feet.

Kelly Richardson, on the other hand, transports us out of our troubled atmosphere all the way to the 11th power of ten, and provides us with a breathtaking view of the asteroid belt in our solar system. We find ourselves in a region between Mars – a planet Richardson previously visited in the monumental installation, ‘Mariner 9’ – and Jupiter. The countless slowly rotating bodies appear as crisp as if we’re looking out of the windows of a space ship; all potential new Chixculub impactors – named after the meteor that helped to end the reign of the dinosaurs which resulted in the rise of mammals, including us. The cool light bouncing off of the indifferent chunks of space debris is a distant counterpart of the glowing embers dancing in some of Richardson’s other virtual camera frames.

When we return to the human power of one, we’re left with the realisation that while our species’ behaviour is responsible for the current global extinction event, it’s equally capable of producing uniquely imaginative visions. Art alone can’t save the world but the creation of art may very well be considered as the yin to our destructive yang.

This emptiness is normal.
by Alexandra Crouwers.