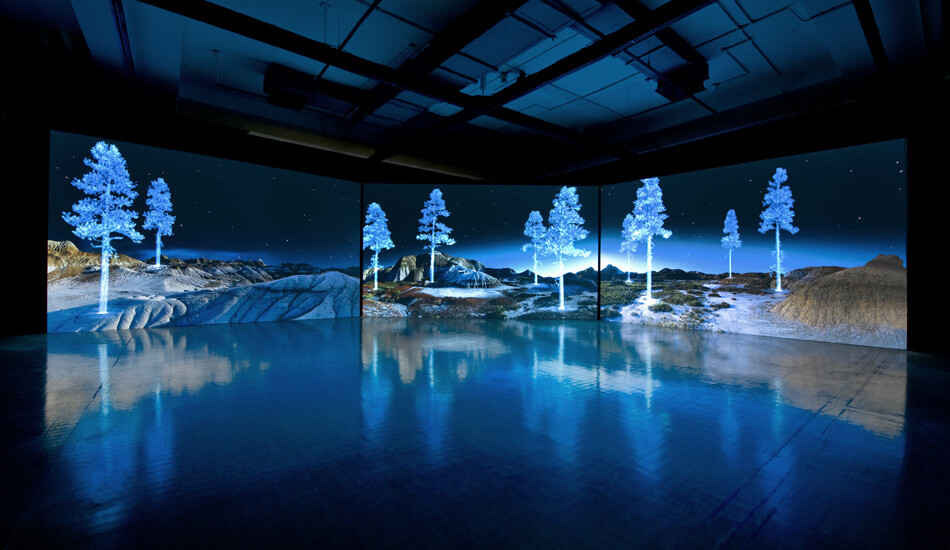 The selection of photography and video-based works in “Supernatural: Art, Technology and the Forest” at the Art Gallery of Greater Victoria seems less intended to provide directives than to register tensions. Curator Haema Sivanesan indicates gestures of connection without becoming explicitly political, while upholding a sense of reverence that accommodates moments of both open-endedness and opacity.

A powerful introduction to the show, Kelly Richardson’s three-screen video installation The Erudition (2010) presents a nocturnal hoodoo landscape haunted by twitching holographic trees. This film-negative aesthetic, recalling the spectral landscapes of Peter Doig, evokes both intimacy and unease: a state of being not-at-home at home.

Contrasting with The Erudition’s atmospheric ambiguity are geographically specific works in which forest composes both site and archive.

A nearby monitor screens Bones of the Forest (1995) by Heather Frise and Velcrow Ripper; this documentary features First Nations Elders, alternative loggers and corporate apologists, spliced together in a nod to punk’s DIY ethos.

This contrast—between document as frame and forest as continuum—continues in the video How to climb a tree (2017) by photographer and video artist Sandra Semchuck and performance artist Ayumi Goto. Offering abstract homage to Squamish carver Robert Yelton, Goto moves through forested space in a dance aligned with Semchuk’s continuo of overtone singing.

Semchuck’s practice is also represented by a series of landscape photographs overlaid with text. The relentless density of Semchuk’s settings—all middle ground—and the ambiguity of the speaker or listener in the texts allow for an intersubjective approach that moves beyond genre.

Further gambits of perspective and identity take place in artist-anthropologist Trudi Lynn Smith’s work, Drift Camera (2015–ongoing). Halfway between a camera obscura and a wearable tent, this structure is suspended to form a cave-like recess from which a single viewer gazes out at driftwood that Smith dubs, “a fugitive forest.”

Transformation via camera is at hand in two other photo series: Dan Siney’s Stump 1, 2, 3(2008) and Rodney Graham’s Study (5 Polaroids from Series: 75 Polaroids) (1976). Siney’s anthropomorphized stumps are the result of loggers cutting eye-like notches into trees for springboards before cutting. Blurrily monumental, they are accidental votives in a state of fertile decay. Graham’s pictures, likewise, make strange a kind of lark: a walk through the forest at night with a Polaroid camera. Tantalizingly hermetic, his images stage a provocative vanishing act.

Carol Sawyer’s Woodwork (2011) consists of seven short videos made from archival footage of the logging industry. The truncated videos develop a metanarrative: fragments of an epic depicting epic fragments.

Mike Andrew McLean’s series JR (2015–ongoing) documents the ongoing narrative of “ghost town” Jordan River, northwest of Victoria. In 2014, residents were told that the combination of a nearby dam and seismic activity meant the threat of sudden flood in the event of an earthquake, an apocalyptic prophecy that loomed large for the artist as he traversed these remnants of the town with his large-format camera. Notable is his use of scarce Kodak Aerochrome film, developed for military and surveying aerial photography, which tints organic material in hues of pink and crimson, summoning counterpoints as richly varied as Frederick Edwin Church, Walt Disney, Richard Mosse and Edward Burtynsky.

A defining non-feature of “Supernatural” is its absence-as-presence of Indigenous voices. With its focus on photo-based media, the story of the forest presented here is one of Cartesian colonial methodologies: capture, extraction, taxonomy and commodity. This point is underscored by the accompanying exhibitions in the gallery: “Form as Meaning,” a survey of Indigenous printmakers, and “Picturing the Giants,” a show of Emily Carr’s work in dialogue with pieces by contemporary First Nations artists like Sonny Assu and Lindsay Delaronde, among others.

Between these exhibition offerings, indigeneity is performed in varied guises, transposing itself and reorienting its audience, with the forest—home (for some) to formlessness, and at the very least, home to phenomena that elide photographic capture—as informal host.

John Luna is a poet, critic and visual artist whose practice includes painting and installation, and a teacher working in the areas of art and art history. He is based on Vancouver Island.