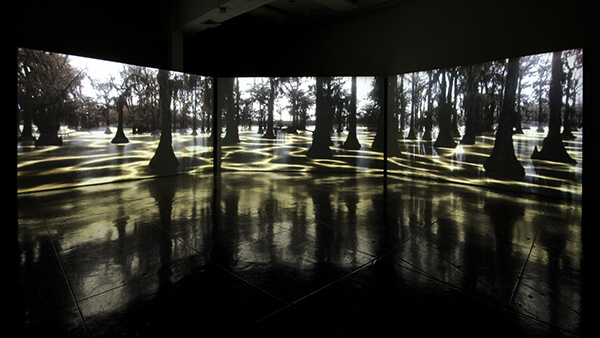 A new touring exhibition from the Art Gallery of Guelph, entitled The Drive, opens this weekend at the Confederation Centre Art Gallery (CCAG) in Charlottetown.

Anchored by Art Gallery of Guelph’s major Tom Thomson canvas of the same title, The Drive situates the work of Thomson, the Group of Seven and their peers in relation to contemporary Indigenous and Canadian artists in order to highlight the complexity of the representation of landscape – particularly as it relates to the history of resource development.

Thomson’s The Drive (1916-17) is considered to be among the artist’s most significant paintings, featuring the logging industry in Algonquin Park, a common subject for the artist and one often overshadowed by his paintings of untouched landscapes such as The Jack Pine (1916) and The West Wind (1917).

Based on a sketch produced in the summer of 1916 when Thomson was employed as a fire ranger in the park, the canvas depicts a massive flow of timber emerging from a dam at Grand Lake near Achray in Canada’s oldest provincial park. The logs being guided through a narrow gap in the dam were headed towards the Ottawa River.

The Drive painting captures the intensity of logging in a park that had already been widely clear-cut in Thomson’s day. The industry was the primary shaper of the landscape the artist painted and made famous, defining this landscape as post-industrial, not the untouched wilderness it is so often described as.

A.Y. Jackson’s depictions of mining settlements and J.E.H. MacDonald’s agricultural scenes and views made accessible by rail are contextualized within the exhibition.

The Drive opens today, one of three new exhibitions opening this month at the CCAG. It is curated by Shauna McCabe and Brian Meehan.