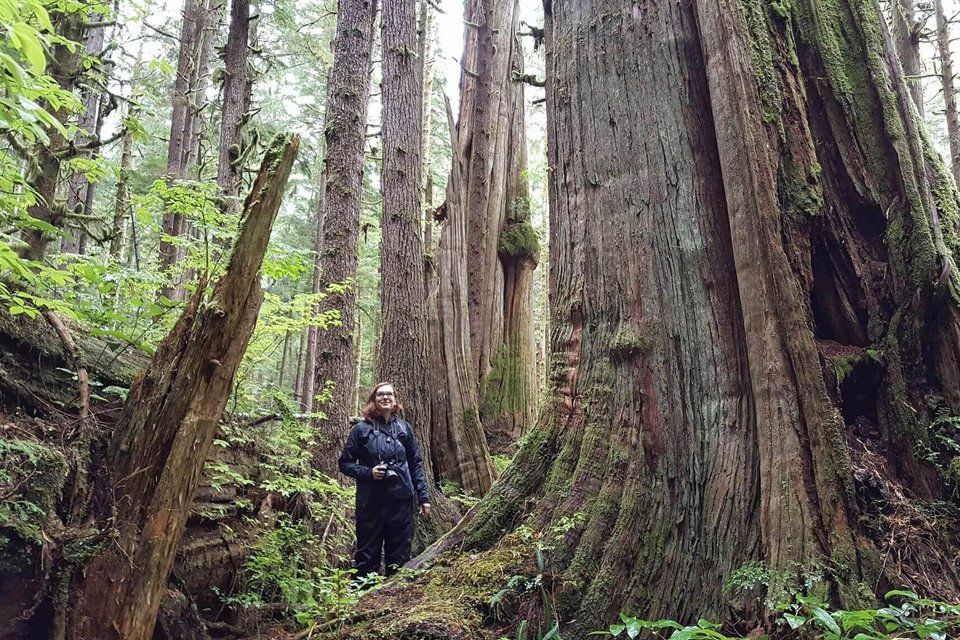 Created with the participation of the Ancient Forest Alliance (AFA), Richardson’s large-format film will be shot in July at Port Renfrew’s Avatar Grove (a popular nickname for its Nuu-cha-nulth Pacheedaht name of T’l’oqwxwat) by Christian Kroitor, the grandson of IMAX inventor Roman Kroitor, and released on IMAX screens across Canada next year.

The Ontario-born artist, who has been living in the UK since 2003 and teaching at Newcastle University in northeastern England since 2013, cites proximity to Vancouver Island’s old-growth forests as one of the reasons she moved to Victoria and accepted the position at UVic.

New project to be featured as part of IMAX 50th anniversary, Richardson and four other Canadian media artists—Michael Snow, Oliver Husain, Lisa Jackson and Leila Sujir— are featured in the upcoming XL-Outer Worlds project which celebrates the 50th anniversary of the IMAX, a Canadian invention by Roman Kroitor.

Home to spectacular stands of old-growth trees, Richardson decided to move to Vancouver Island specifically upon seeing BC’s old-growth forests firsthand during her time as a UVic Visiting Artist in the fall of 2016.

“I was overwhelmed by my experience of those ancient stands, which was a huge influence in my decision to apply for a professorship at UVic,” says Richardson. “I couldn’t believe those ancient stands still exist at all anywhere in the world, let alone here. My upcoming projects will feature the old-growth forests in this region and I hope I can contribute to efforts to raise awareness about their outstanding beauty and the plight to protect what remains.”

“It’s not just the sheer size but it’s actually how you feel in front of these ancient trees.” – Kelly Richardson, visual arts prof

In 2017, Richardson was involved in 14 solo and group exhibitions across Canada and in China, France, the UK and the US. Her video installations have been included in the Toronto International Film Festival, Sundance Film Festival and she was previously honoured at the Americans for the Arts’ National Arts Awards alongside Robert Redford, Salman Rushdie and fellow artist Ed Ruscha.

Richardson’s old-growth project will be created with the participation of the AFA which, together with the Port Renfrew Chamber of Commerce, spearheaded the protection of Avatar Grove / T’l’oqwxwat located in the Pacheedaht First Nations’ traditional territory and home to one of the most spectacular and easily accessible stands of monumental old-growth trees in BC.