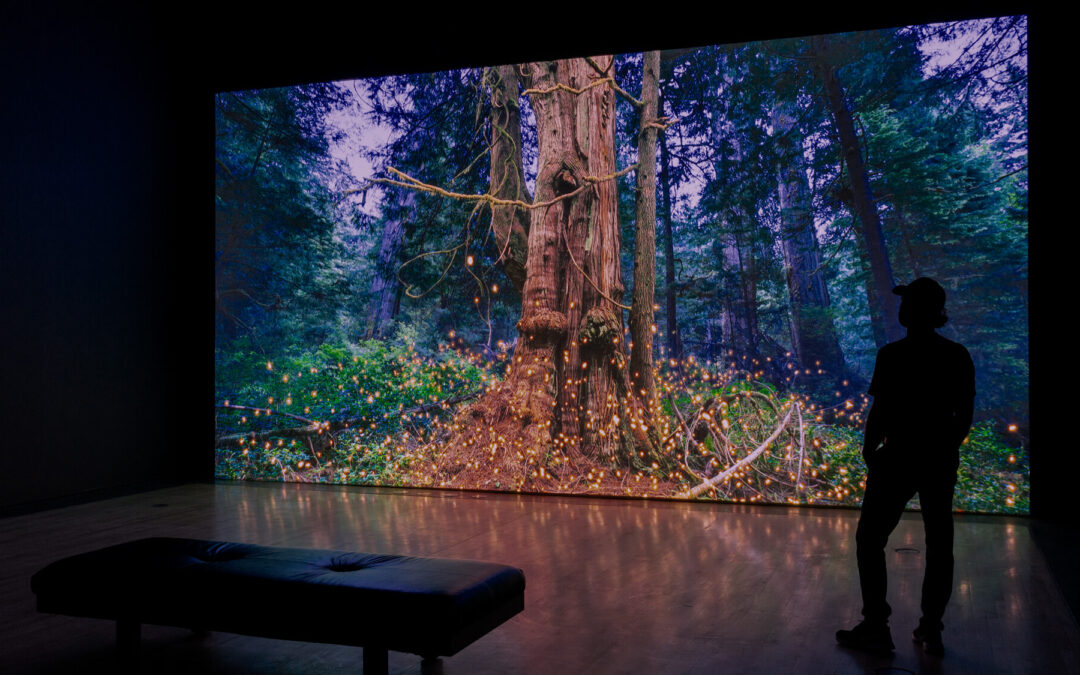 Using digital technologies, Kelly Richardson creates hyper-real, sublime, and spectacular landscapes that communicate underlying unsettling narratives. Richardson is a Canadian artist based in Victoria, BC, where she is a Professor in Visual Arts at the University of Victoria. From 2003 to 2017, she lived in North East England, where she was a Lecturer in Fine Arts at Newcastle University. Widely recognized internationally, Richardson has exhibited her work less frequently in Canada. This solo exhibition presents a view into Richardson’s longstanding exploration of our relationship to nature and how this relates to climate change.

Halcyon Fog includes two large-scale immersive video projections, Embers and the Giants and Pillars of Dawn. Both were made in 2019 as a response to the imminent extinction of the Coastal Douglas-fir ecosystem and the associated environmental catastrophes as foretold by biologists and climate scientists globally. The exhibition also includes two new video works that suggest a link between unsustainable forest practices and the prevalence of wildfires. These works present a view of an untenable future on Earth. They also offer a call for action that can happen today.

Embers and the Giants engages with our human sentimentality, drawing the viewer in with small twinkling lights that appear to be glowing in the forest like fireflies. After sustained viewing, the lights are revealed to be small drones, surveying the forest floor. Richardson points to our increasing reliance on technology along with our increasing detachment from the natural world. Embers and the Giants speaks to our fascination with shiny glowing insects and to our desire to protect species that are cute or beautiful, while we continue to cut down the ancient trees that provide their habitat. Some old growth trees are up to 2,000 years old and yet these trees continue to be industrially harvested. These forests are a vital part of the ecosystems which sustain wildlife, store vast quantities of atmospheric carbon, and provide clean water. They are also culturally vital to Indigenous communities. Playing on our sense of awe for the natural world, Richardson’s work asks existential questions about what we ultimately value.

Pillars of Dawn also presents uncanny illuminated images of shimmering trees. In this work each branch and the surrounding landscape is comprised of millions of individualized crystals, resembling diamonds. Upon closer observation, the images present a dystopic desert landscape where adverse environmental conditions have crystallized the terrain. One crystal in each of the Pillars of Dawn landscapes represents every species still alive today. In these fictitious landscapes, Richardson proposes a future reality where each species has been transformed into pure carbon. With diamonds being the most concentrated forms of pure carbon in the natural world as well as a signifier of wealth, Richardson asks us to again consider what we value. Here, the remaining wealth of the living planet is revealed, but no humans appear present to appreciate it. By manipulating images of nature, Richardson emphasizes how our extractive relationship to nature has resulted in the Anthropocene; the geological epoch of time we are now experiencing where human behaviour is adversely impacting the Earth’s geology and ecosystems. Drawing on disparate sources, including geographical and astronomical prints, historical wood engravings, and late 18th century romantic landscape paintings along with B-horror and science-fiction movies of the 1970s and 80s, Richardson’s images are both otherworldly and of our world.

The exhibition also includes a trilogy of videos HALO I, II and III. The HALO trilogy presents two full moons, one partially red and another fully red, both distorted by heat rising from something burning and crackling out of view. The third video features a red solar eclipse known as the ring of fire; embers float around and smoke swirls. Representing past, present, and future, the HALO trilogy addresses the context we are in now after decades of warnings about global warming and climate change. A sequel to her 1998 video, Camp, which presents a clichéd look at outdoor life, this new work brings today’s reality into focus. Campfires are now banned most summers in BC with the “new normal” including record-breaking temperatures and unprecedented wildfires.

In a new work completed for this exhibition entitled Journey to the After, Richardson searches for hope within this grim reality. Journey to the After presents a large expanse of water during first and last light that reflects the vibrant colours that fill the sky. Dozens of floating tear gas canisters—the aftermath of a protest—emerge on a spectacular surface while butterflies flutter and rest on the canisters before carrying on their way. Journey to the After is grounded in the power of protest as fertile ground from which to change our futures.

The exhibition title, Halcyon Fog, draws on the definition of “halcyon,” which is characterized as our nostalgia for an idyllic past of prosperity and happiness. Evoking natural phenomenon, “fog” offers a double meaning, referring to our willful ignorance, which allows us to continue to be complicit in negatively impacting our planet while dreaming of an unchanged future for subsequent generations. The exhibition presents a tension between the horrific and the beautiful and suggests a future where we might have to look beyond our current planet for refuge and survival. Ultimately, through Halcyon Fog, Richardson asks us to consider what we truly value and where we might go from here.