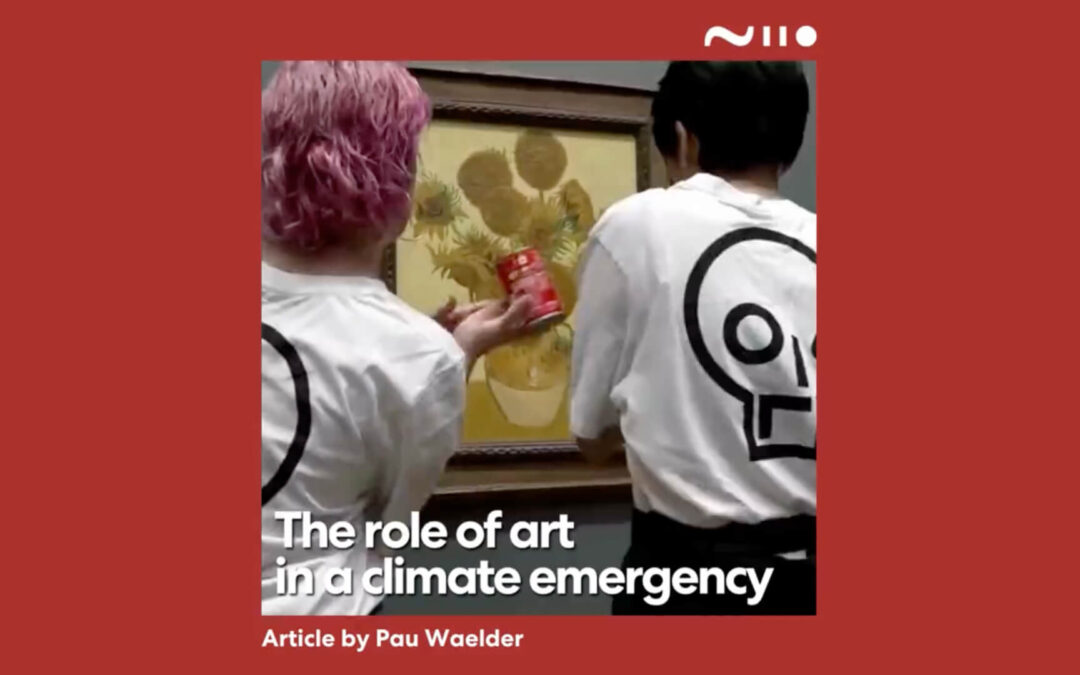 The Role of Art in a Climate Emergency

On 13th October 2022, two climate activists from the environmental group Just Stop Oil, Phoebe Plummer and Anna Holland, threw two cans of tomato soup at Vincent Van Gogh’s painting Sunflowers (1888), on display at the National Gallery in London. They glued one hand to the wall under the painting and sat on the floor. Phoebe Plummer then said:

“What is worth more, art or life? Is it worth more than food, worth more than justice? Are you more concerned about the protection of a painting or the protection of our planet and people? The cost of living crisis is part of the cost of the oil crisis. Fuel is unaffordable to millions of cold, hungry families. They can’t even afford to heat a tin of soup. Meanwhile, crops are failing, millions of people are dying in monsoons, wildfires, and severe droughts. We cannot afford new oil and gas, it’s going to take everything we know and love.”

The young woman’s passionate statement was cut short by a security guard who proceeded to remove them from the premises. The activists were brought to a district court and charged with criminal damage. Van Gogh’s painting, protected by a glass, was not harmed, although the frame suffered minimal damage, according to the museum.

The protest has sparked widespread outrage at what can be seen as an act of vandalism. Attacks on artworks at museums have been perpetrated many times by individuals for a variety of reasons, sometimes political, sometimes to draw attention to personal issues. Often, the perpetrators have been described as insane. It is therefore unsurprising that the act carried out by the two young activists has been perceived as criminal, deranged, and appalling, or simply dismissed as stupid. This type of protest is not new, it has been taking place over the summer by Just Stop Oil and then by climate activists in Italy, in actions that mainly consisted of gluing their hands to the protective glass or the frame of a famous painting depicting nature. The activists have taken precautions not to harm the artworks, and therefore cannot be considered to vandalize them, although they have at times caused damages to the gallery walls or the frames. However, no other protest has caused such strong reactions as the one carried out by Plummer and Holland, probably due to the aggressiveness of throwing liquid over a painting (which would normally cause irreparable damage), and maybe also due to who carried out this action. Two young queer women, Plummer and Holland have increasingly become the target of critics who have questioned their sanity and intelligence, and ridiculed everything in them, from their names to the color of Plummer’s hair and her accent.

Artist Kelly Richardson deals with climate change in her work by creating imaginary futures that prompt a reflection on our present. In this way, the message is placed at a certain distance in time that does not produce anxiety and allows a space for action:

“Until this point, on this precipice, we’ve allowed terrifying futures to be ushered in despite the predictions of so many. Perhaps we have allowed this in part because we couldn’t visualize or understand these futures from an experiential point of view. I try to offer this window of understanding through my work. I create potential futures for people to experience, to encourage reflection on current priorities and where those are leading us as a species.”

In HALO (2021), Richardson depicts a red moon distorted by heat rising from a campfire, a scene from her summer evenings in British Columbia that now takes a different meaning as the rising temperatures have led to banning campfires due to the risk of wildfire. “Summers now bring a mix of joy for its promised, remaining riches and genuine fear associated with what else they will bring,” states Richardson, “I now look out my windows towards a tree-covered mountain and think, «that’s a lot of fuel».”

The scene in Richardson’s video is relatable and in this manner makes its message stronger.