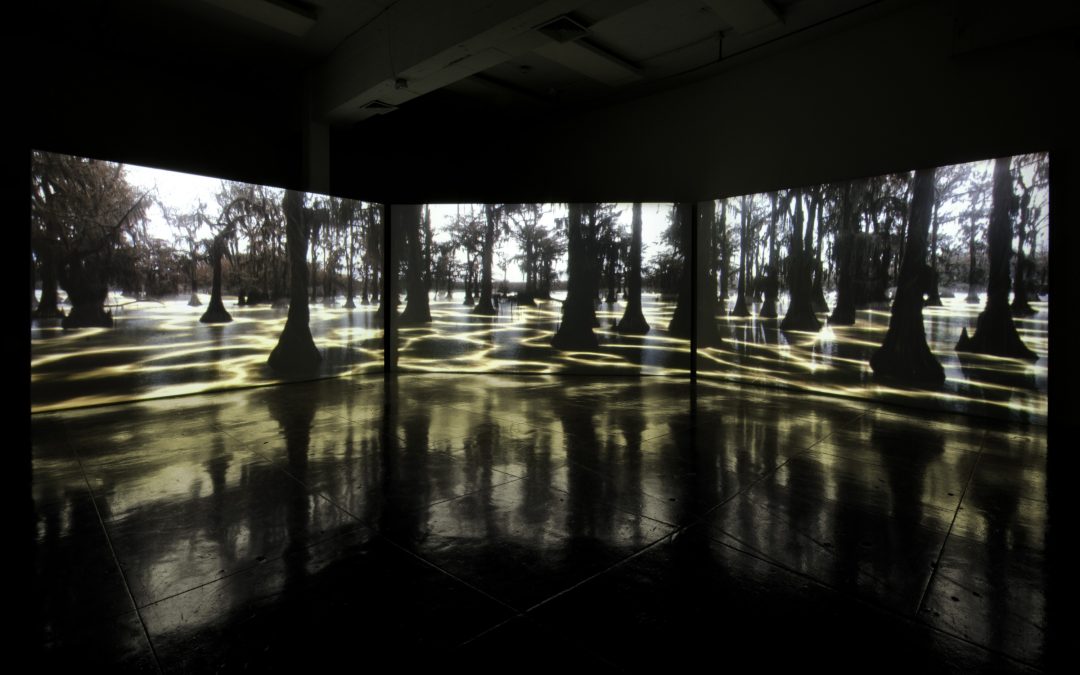 WITH ever-more powerful “weather events” seeming to range around the world, with microscopic plastic particles invading our air and waterways, not to mention a vast flotilla of the stuff in the Pacific creating an “island” the size of France, with pollution on an unprecedented scale and warmongering the order of the day, the idea that our planetary future hangs in the balance is somewhat prescient. Hope must reign, of course, but the problems are something that artist Kelly Richardson has long been contemplating. In this first exhibition by the Canadian artist in Scotland, visitors to Dundee Contemporary Arts will be able to consider her thought-provoking, post-apocalyptic art in its spectacular large-scale form.

Programmed in part to coincide with the Discovery Film Festival for children and young audiences – and with a packed events programme running alongside it – DCA’s exhibition comprises three of the artist’s video works and a series of chromogenic prints, Pillars of Dawn, a desertscape of environmental desiccation in which trees and plants have been physically crystallised by some unknown environmental event.

Richardson is a Canadian artist, until recently based in the north of England, but now back in Canada on Vancouver Island where she is associate professor in Visual Arts at the University of Victoria. Her digital films are hyper-real concoctions, taking complex landscapes and manipulating them with CGI, animation and sound to create something “other”. Eoin Dara, head of exhibitions at DCA, has been following her work for some years.

This is not a new body of work, more a survey, says Dara. “We’ve brought together a curated selection of Kelly’s existing works to speak together for the first time,” he tells me, when we talk on the phone a few days before installation begins. “Beyond the stark beauty of the works, and these wonderfully immersive videos, the questions that she’s asking about the way we’re mistreating the world around us, about global warming, the constant consumption of resources and how we’re going to manage after mismanaging it for so long are so incredibly pertinent and urgent right now. It really feels like an urgent exhibition to be working on.”

Certainly Richardson’s work is visceral and provoking. The artist works with both brutality of vision and evocative suggestion – it is never quite clear what is going on, although what is going on is clearly not good. “These are landscapes that could be familiar or on Earth, and yet something apocalyptic or cataclysmic has changed the landscape or is about to, and you’re not quite sure what that is,” says Dara.

The largest work in the exhibition is a giant landscape video titled Mariner 9, an imagining of a Martian landscape 200 years in the future. Peppering this barren, wrecked world are discarded craft, both from previous expeditions to the Red Planet and from imagined future exhibitions. There are signs, perhaps, of life or attempted life, and some of the rovers still, weakly, attempt to find it. But this is not simply an artistic imagining. Richardson has worked with NASA data to produce a vision that is an accurate representation of terrain and debris, including a 20 minute dust storm – an impressive reduction of the sometimes months-long dust storms NASA has tracked on the planet.

“It’s rather like a post-apocalyptic nightmare,” says Dara of this panoramic speculation. “The technologies she is working with are insanely complex. This particular work was created using scenery generation software used by the film and gaming industry, but rather than go down that filmic route, she’s used real data from missions to Mars, so we have a wonderful fictional and imaginary element tied in to stark scientific fact and research. The longer you spend with Kelly’s work, the more uneasy you become. You are lured by the spectacle and beauty, but then become more uncomfortable when you start to realise this is how it could all pan out…”

The two other works, Leviathan and Orion Tide, are equally compelling, and will create further “stories” when viewed in conjunction with each other, Dara says. Leviathan, rooted in myth and metaphor, is filmed in the swamps of Uncertain, Texas, an unsettling vision of a natural landscape with something bioluminescent – inserted by Richardson – lurking in the waters below. Orion Tide is a beautiful night-time desertscape in which points of light and smoke periodically launch into the sky. “It’s not known whether these are missiles or rockets or planes, whether this is humanity leaving the Earth after some disaster,” says Dara. Whether, indeed, they are off to Mars.

The journey, he says, is all in the viewers’ perception. Richardson asks the questions, but it is up to us to find the answers.