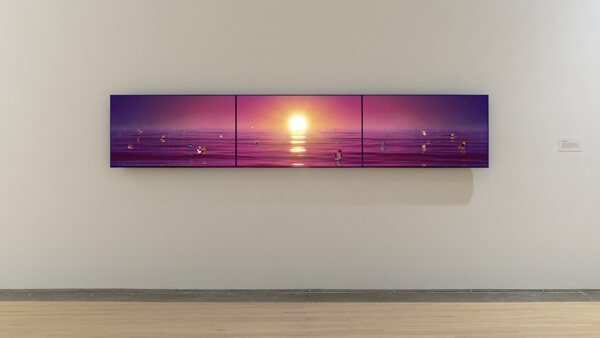 Halcyon Fog is a multi-faceted, immersive exhibition with supporting speaking events. Through projections, video and digital art, the exhibit is aimed at getting viewers to think deeper about their own implication in these destructive systems, and to break the barrier between internal reactions and action.

Kelly Richardson is an artist and professor at University of Victoria, who has been working on environmental themes for 20 years. It would have been nice to move on, she says, but 20 years later, we are at a breaking point. “We live in a time where scientists have told us we’re in the sixth mass extinction event,” says Richardson in her artist talk, in an unflinchingly clear voice.

Richardson’s goal is clear – she’s using art to communicate what science has not. Art has the ability to affect the head and the heart – in other words, the consciousness of people to respond. “For me, what artists can do is get people to think about the world differently. Science has been warning us forever about this future that we’re now living in. Why did we allow ourselves to arrive at this place? All science is saying is what Indigenous Knowledge Keepers have said – forever.”

Through two large-scale video projections, and another two video installations, Halcyon Fog invites viewers to reflect on their lives now, and “what they’re doing to either usher these futures or alter them. That can be done on a personal level and it can be done in such a way that you’re challenging the government on their priorities.” While Richardson sees us as all having responsibilities, “we also have this monster of a machine that is devouring the planet.”