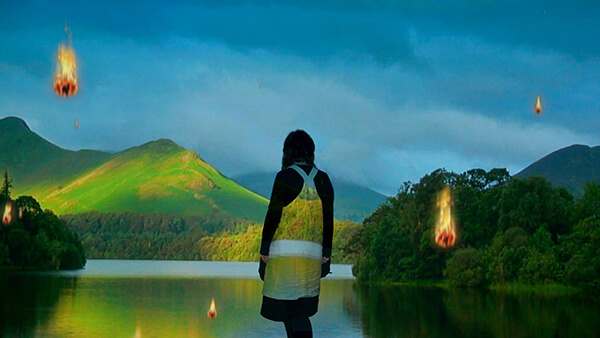 A veritable audiovisual immersion, this exhibition establishes a dialogue between the œuvre of Leonard Cohen and a selection of artworks from the MAC’s collection, including ones created especially for the museum exhibition. The universality of Cohen’s predominant themes (Poetic Thought; Spirituality & Humility; Love; Loss & Longing) illuminate his poetry and vast musical repertoire. Here, a wealth of documentation provides access to a wide variety of audio and video content, songs, poems, interviews and self-portraits, further deepening the essence of his work while uncovering the many links that can be drawn with contemporary art.

Viewers are invited to experience the exhibition’s rich content either by navigating the interactive Explore* section, which presents an overview of works by the exhibition’s featured artists through the four major themes, or through the Gallery section, which presents the works and many of Cohen’s own works. Both the Explore and Gallery sections give viewers an alternative entry point to the same content: artworks, descriptive texts, quotes and artist biographies, as well as hundreds of contextualized images, audio and video excerpts.

The exhibition also underlines the importance of the written and spoken word, as highlighted in the titles of the artworks, songs and poems, arousing our curiosity and acting as a catalyst for discovery. The power of words is especially evoked in the Echo section, where members of the public share intimate moments of personal reflection through audio recordings and written testimonies.

Leonard Cohen was a man of prose and reflection, and his words and works remain as profound, engaging and enlightening as ever. He travelled the darkest realms of emotion and seemed to recognize, at every turn, the inevitability of loss, brokenness and longing: “There is a crack in everything” he wrote. For him, this was an undeniable truth, although eased by a redemptive afterthought, an eternal image of hope and humanism: “That’s how the light gets in.” And it’s through this crack of light that we invite you to enter.

Kelly Richardson‘s work entitled Exiles of the Shattered Star is included in the first section of the four major themes explored: Poetic Thought.

This section of the exhibition explores how poetry provides alternative ways to think about the world, to understand the human condition and the creative process itself. For Leonard Cohen, poetic thought is deeply linked with melancholy and his observations on beauty and personal suffering. For him, poetry transmits a kind of wisdom and is suffused with a certain amount of mystery; it comes from a place that can be neither controlled nor conquered. Cohen often spoke about the challenges of writing: “The process is the opposite of abundance, the opposite of luxury. The operation is like rag-picking. To finally come up with something you can inhabit that changes your mind about yourself, it changes your heart and creates a man around this song, around this poem. That’s what it is, that’s what the great glory is.” —In Armelle Brusq, Leonard Cohen à Mont-Baldy, 1996.

Cohen would often say that his work came down to “blackening pages,” of isolating himself to illuminate through words the inner landscape in each of us, and in this way, transcend his solitude through the creative power of poetry. The works selected under this theme express the challenge of transforming an idea into words or form. They also offer moments of contemplation and put forth a range of associations and interpretations. Finally, they make us see beyond appearances simply by portraying reality in other ways.

In June 2006, Kelly Richardson filmed a sunrise over a magnificent landscape in England’s Lake District, a part of the country well known for its stunning beauty. In Exiles of the Shattered Star, an immersive video installation presented in a continuous loop in a darkened room, a shower of fireballs rains down on this captivating scene. This disturbing event plays out against a serene soundtrack of birds chirping and sounds of nature.

In this surrealistic scene, Richardson shrinks the fine line between reality and fiction, while suggesting the idea of some far-off catastrophe. The fiery fragments descend at a slow, hypnotic pace that holds the viewer’s gaze. Contrasting a representation of a sublime world and the notion of destruction, or even apocalypse, this work echoes the concerns expressed by Leonard Cohen regarding the impermanence and finality of things and life. He who “had a long practice of looking darkness in the eye” nevertheless never stopped evoking the hope of renewal.